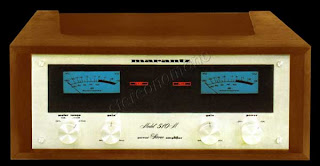 The Model 510 is one of marantz's newest amplifiers in the medium to high power range, continuing their 500 series, and its styling is typical of recent products from this company. The front panel of the basic model contains two level controls, a power switch, and peak indicators; included in the "M" version we tested are two large, illuminated meters and a meter range switch.
The unit is well made and very compact, with a large encapsulated power transformer, two filter capacitors, and the cooling tunnel occupying the majority of the chassis interior. Inside the tunnel are 16 output transistors, each having a small staggered-fin radiator, across which cooling air is drawn from a temperature-controlled two-speed fan. Mounted on either side of the tunnel are the amplifier boards, which allows the transistor pins to solder directly to the printed conductors, thereby saving both space and considerable chassis wiring. The top cover is perforated and has a foam air filter mounted to its underside to keep dust and other debris from being drawn into the box. Marantz recommends periodic cleaning; this is easily accomplished by vacuuming the top surface of the amplifier. Mounting and installation of the unit is straightforward, widh details in the owner's manual.
Several inches should be allowed atop the amplifier installation for it to draw cool air, and an opening is similarly required behind the fan for warm air exhaust. All connections are made to the rear panel. Speaker jacks are the five-way binding post type, and inputs are 1/4-inch phone plugs. provided with the amplifier are adaptors to convert the inputs to the more common RCA jacks. 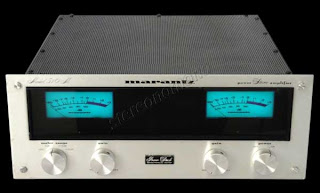 Marantz tells us their design intent on the peak load indication system was to indicate the approach of clipping on peak transients, rather than an actual clipping situation. Thus, the system should not be considered as indicating an overdrive situation, as the LEDs will light up before actual clipping. the system tracks the power supply voltage so it will always give the same warning margin that clipping is approaching, regardless of the AC power line variations. While the circuit turns on in microseconds, the "hold" portion of the circuit keeps the LEDs lit long enough so they can be seen by the eye. The system indicates an actual overload condition by staying on more or less continually. Thus, 510  users should consider occasional flashing of the LEDs as full use of the normal operating range. 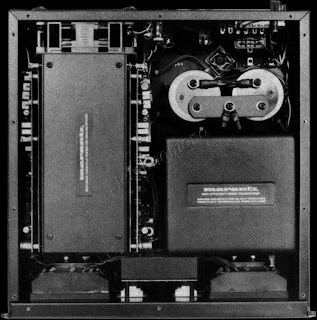 Circuit Description
Suitably attenuated input signals are a.c. coupled to the unity gain buffer amplifier, which uses Q301 and Q302 in a circuit often called an amplifier emitter follower. This stage exhibits a high input impedance which minimizes the the loading on the gain control and the preamplifier. Minimum input impedance for the 501 is approximately 31 kilohms, so preamp manufactures' specifications should be checked to ensure compatibility, especially if vacuum tube preamp models are used.
Capacitor C307 couples the buffer amplifier to the noninverting input of the differential amplifier Q304 and Q306, and feedback is applied as usual to the inverting input. Marantz has used an uncommon but simple circuit to combine both phases of output signal from the input stage, while also getting the ability to pull the driver stage hard in either the positive or negative direction. Transistor Q307 is the key to this circuit; it is connected as a common emitter amplifier to get the necessary signal inversion and voltage translocation, but degenerated to a gain slightly less than 1, in order to match its characteristics to its mate, Q308, conected as an emitter follower. It can be shown that the driving signal at the collectors of Q309 and Q310 will be relatively free of even harmonics by nature, if the transistors are chosen carefully and the resistors involved are properly balanced.
The output stage and its drivers are straightforward, being similar in design to those of other high quality amplifiers currently in production. Eight output transistors are used per channel in a complimentary, series-parallel arrangement. Such a design allows the use of low voltage expitaxial base devices, giving the composite  stage a very good safe operating area (especially important with reactive loads such as electrostatic speakers) and good current linearity as well.
V-1 limiting is employed for protection, but its action is not instantaneous, so short duration transient will not trigger unnecessary limiting. Capacitors C315 and C316 are used to accomplish this effect 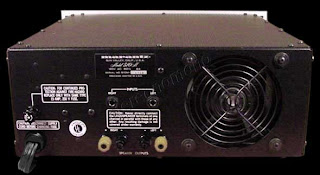