FM IF stage with IC and solid-state filter

Budget minded hi-fi enthusiasts will find the STR-7015 well within their reach and well up to hi-fi standards. Power output is moderate but adequate to drive a fairly efficient speaker. It doesn't take much to really appreciate the STR-7015's circuitry and performance features. Another fine example of Sony's advanced engineering and component design expertise.

The STR-7015 features a direct coupled true complimentary power output stage that delivers 15 watts per channel, minimum RMS at 8 ohms from 40 Hz to 20 kHz with no more than 0,8% Total Harmonic Distortion. Though the power output is modest, the performance is outstanding. For operation of main and remote speaker, the STR-7015 features two pairs of speaker outputs in addition to a speaker selector switch. 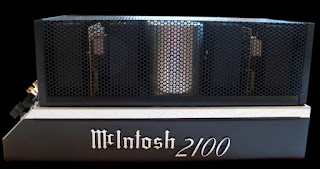 A two stage preamplifier with three transistors in each channel increases the input voltage 16 dB .

There are 13 transistors in each power amplifier section. The two stage preamplifier is fed to a pair of matched transistors arranged as an emitter coupled amplifier with two inputs and one output. The signal from the preamplifier section connects to one of these inputs. Both AC and DC negative feedback are applied to the other input. This large quantity of feedback is used to reduce noise and distortion. The signal is then fed to a voltage amplifier. The voltage amplifier is followed by two driver transistors.

The output section is arranged as a series push-pull amplifier. The power transistors used in the output section of your MC 2100 are selected for their high power dissipation capability, wide frequency response, and large "safe operating area." In addition, each power transistor is given four separate tests before it is put in your MC 2100. This additional testing makes sure your MC 2100 will deliver its rated power from 20 Hz to 20 kHz with low distortion and complete reliability. 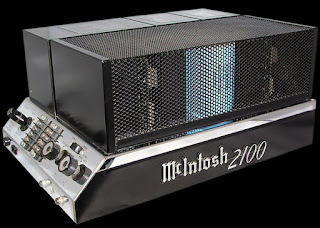 The power transistors are mounted on oversized anodized heat sinks. The heat sinks assure that under normal operation the transistors will operate at a low temperature. If temperatures increase due to a shorted speaker, or restricted ventilation, an automatic temperature sensing device turns off the MC 2100. The device operates automatically at a preset temperature. The MC 2100 will turn on again when the temperature has returned to normal limits. This additional feature gives your MC 2100 complete reliability under the most extreme operating conditions.

The use of the Mclntosh designed trifilar autoformer makes the Mclntosh solid state amplifiers the only amplifiers that deliver Full Power at All Speaker Impedances. You have not been power penalized for your choice of loudspeakers when using the Mclntosh MC 2100. 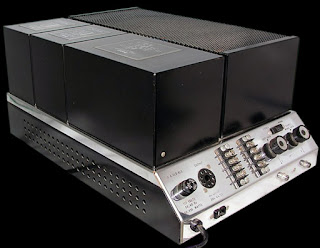 Another of the advantages of the autoformers is the 25 volt output for a constant voltage distribution system. With the MC 2100 several sets of speakers can be operated independently throughout your home.

There are three separate power supply sections. One positive and one negative high current supply is used for the output stages. The other positive supply is used for the driving amplifier stages. All supplies are full wave and use silicon rectifiers. Adequate filtering is used to assure an absolute minimum of hum. The power output stage filter capacitors have very high capacity, which allows full power output below 20 Hz. The power transformer is generous in size and runs cool, even under heavy use. 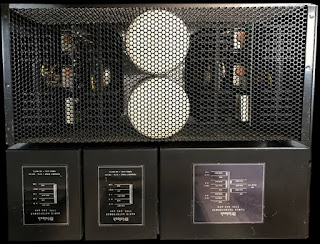 Stereo :  105 watts (continuous, per channel, both channels operating, which is):

Stereo :  Will not exceed 0.25% at any power level to 105 watts output per channel from 20 Hz to 20,000 Hz both channels operating. Typical performance is less than 0.1% at rated power. Distortion decreases as output power is reduced

Stereo :  Will not exceed 0.25% if instantaneous peak power is 210 watts or less per channel with both channels operating for any combination of frequencies 20 Hz to 20,000 Hz

Noise and Hum:  90 dB or more below rated output

The amplifier is completely stable when connected to any loudspeaker system or even to any reactive loads. The MC 2100 has special circuits to prevent damage by short circuit or open circuit of the output loads, or by any amount of output impedance mismatch. Thermal cutouts are mounted on the output transistor heat sinks to provide protection in the event of inadequate ventilation.

Performance Limits are the maximum deviation from perfection permitted for a Mclntosh instrument. We promise you that the MC 2100 you buy must be capable of performance at or exceeding these limits or you get your money back. Mclntosh is the only manufacturer that makes this guarantee.

Super Slim Up to The Minute Design with Feather Touch Control

Super GX Heads Usher in The Age of Metal Tape

Superficial modifications would have been totally inadequate to bring about the greatly improved performance achieved in the GX-F90. for this, Akai's engineers went to the heart of the matter - the heads. The Super GX Head follows in the tradition of the immensely successful GX and new GX heads. It employs improved crystal ferrite as the core material, a super-hard substance which provides longer head and tape life. The heads of the 3-head system maintain optimum individual gap widths for better recording and playback characteristics with virtually no azimuth loss. Another advantage is that it enables direct tape monitoring. All this makes the Super GX Head ideal for metal tapes, with their greater dynamic range and improved Signal-to-Noise Ratio. Greater performance is obtained from conventional tapes, too. 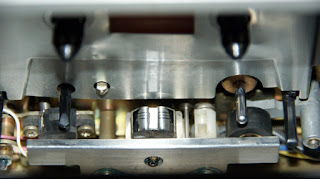 High torque and minimal ripple, resulting in Wow and Flutter of less than 0,08 (DIN) are the major advantages of the GX-F90's transport mechanism. The Direct Capstan Drive system employs a coreless/FG Servo DC motor incorporating a Sample-and-Hold circuit for the capstan and a coreless DC servo-controlled motor for the reel drive.

Reflecting the latest trend in electronics, the conventional needle-type level meter has been replaced in the GX-F90 by a 48-segment fluorescent meter. Using 2 colours to indicate levels below and above 0 dB, it shows either the peak level or VU reading at the press of a button. The advanced digital circuitry provides level readings of much higher accuracy than the mechanical type.

Playback - It's All Automatic

Let the instant Programme Locating System find the song you want to play. The system detects the beginning of the song by the volume level and the time constant and then commences playback automatically. The song can also be played repeatedly by setting the index counter to "000" and pressing the Repeat and Memory buttons. For continuous playback, press the Repeat button and at the end of the tape it will rewind to the beginning and resume playback.

The feather-touch logic controls light up when touched. And with the Pause button on, when you press a mode button, the button will flash, to indicate the next mode. What's more, you can switch directly from one mode to another without having to press the Stop button. Operating the deck is thus exceptionally fast and simple

A Cal Tone button is provided which activates a built-in oscillator to supply a 400 Hz recording signal for recording calibration adjustment. Use this reference signal when performing re-calibration with the two Rec Cal adjusters to match the characteristics of the tape being used. An especially useful feature when making Dolby NR recordings.

Much has been written about the unique Dolby NR system, and how it greatly improves the sound of cassette tapes. It is exemplified by the GX-F90's Dolby NR system which works by raising low level signals prior to recording and then lowering them proportionately on playback. This results in sharply reduced tape hiss and an improved Signal-to-Noise Ratio of up to 10 dB above 5 kHz. The Dolby effect can be monitored during recording to cut the disturbance caused by the 19 kHz pilot signal during FM stereo broadcast recording with Dolby NR system, this deck ha an MPX Filter Switch. The ability to turn off the filter at all other times ensures full wide range frequency response.

This system designed by Akai automatically adjusts recording equalization at high frequencies while at the same time suppressing intermodulation distortion Sound that is crystal clear over the entire frequency band is obtained.

Incorporates a large number of well designed ergonomic features. One feature that  particularly liked is that the disc holder is manually closed rather than electronically closed; this relies on the natural response of most users to "push the darn thing closed" and not to look for another switch with which to close it. In the centre of the panel is the display module which is divided into four horizontal layers. The top layer provides mode information, telling you whether the unit is in standby, pause or play mode. The second level of the digital display tells you the number of the selection that is actually playing. If the unit is not playing a zero is displayed. The third row provides the elapsed playing time in minutes and seconds. The programming keys on the right hand side of the panel also tell you the time in minutes and seconds at which the start of a cycle or sequence should commence. The bottom section is a quasi -analogue display which shows the position of the recording head using an array of light emitting diodes. The control switches consist of one double sized 'play' button with its own self indicating LED. four buttons for 'Stop - Eject', 'Pause', 'Fast Forward' and 'Fast Rewind' and two buttons labelled 'PLS' for automatic location of either the previous selection or next selection on the disc. 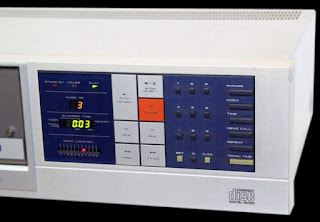 On the right hand side of the console are ten keys for keying in numerical data, a 'set' switch, a 'cancel' switch and six elongated keys. The top elongated key is for the selection of 'phrase', a term commonly used by all the manufacturers meaning the selection of the time or section in seconds.

The 'index control' is used on those compact discs that have the display IN:DEX. These discs, which are not currently available, will allow you to select the music sequence number and select a particular segment within that sequence. This is achieved by selectively pressing the 'index' key then pressing the sequence number. As none of the discs that I was playing had the IN:DEX display I could not check this function. The 'time' switch tells you the residual playing time on the disc, the 'memo call' allows you to check what you have stored as memory instructions, the 'repeat' switch allows you to repeat one sequence over and over again and the 'total time' switch tells you the total time on the disc. On the back of the unit is a volume control with which you can adjust the player's output level to match your amplifier's auxiliary input requirements. This unit also has a pair of gold plated phono sockets which is a common feature on all the CD players reviewed.

The distortion level increases as the signal level decreases, so that at -80 dB (reference 0 dB level) the distortion level is 12%. This was just about the highest level of distortion recorded from any machine, although I must make it clear that these distortion levels would be totally inaudible and during the subjective testing we could not detect them. Functionally, the performance of the Akai CD -D1 could not be faulted and I really liked the neat control format and the multiple design features. The best demonstration discs produced a scintillating sound which impressed everybody who heard it. 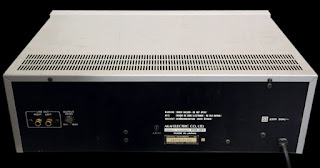 Revolution:  Counterclockwise (viewed from pick-up side)