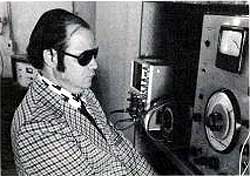 At thirty-two, Roy Cizek, inventor of the loudspeaker that had audiophiles buzzing from the advance word alone, became president of Cizek Audio Systems, Inc.

The speaker, manufactured in Newton,MA, is Roy's own - the most recent of a series he designed, built and tested after many years of research and development. For Roy Cizek is a perfectionist. A man in search for accurate reproduction of sound.
He first became interested in music when he started trumpet lessons at the age of six. Combined with an aptitude for electronics which began at 13, Roy's life became a double-track on music and electronics.
Majoring in trumpet and piano with a physics minor at the University of Indiana, he started to build speakers with his first :pro" speaker coming out during his junior year.
By 1964, he had opened a hi-fi store in Bloomington, Indiana and, with the help of an English physicist, developed a house brand. During this period, Roy's store and sound room were rated among the best in the nation.
Developing various systems between '65 and '74, Roy was admitted to MIT to study electrical engineering, when the speaker absession hit once again. ":There's just always been this 'thing' about speakers, this need to predict everything, to know a speaker intimately, and to get as close as possible to totally clean and clear concert hall sound". 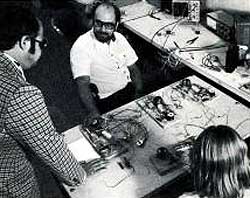 According to Roy,"most engineers desgn the circuits for a speaker, build it, and then compensate for its inadequacies after listening to it. My problem was that I had been building a speaker, beginning to get the sound I was after, without being able to measure it. I couldn't predict on paper and Ididn't know why I was getting what I was getting."
In april of '76, with a physics/mathematics associate, Roy began to finalize the Cizek speaker. The two spent 80 hours a week going over the basic principles, building, measuring, researching, writing, and working equations, time and again.
And on May 30, they finally had something. Friends at a leading loudspeaker company proclaimed it "incredible", and several dealers took advance orders, sound unheard.
Roy claims that the success of the new Cizek speaker has evolved as a result of follow through on very basic principles and theories. "In any speaker thet utilizes a single woofer anda single tweeter, the key is the crossover network. Most speaker do not produce flat response over the entire sound spectrum. There are always exaggerations or depressions - distortion of some kind, somewhere -  but uniformly the trouble spot is the crossover network, the point where the woofer and tweeter join. That's the problem we finally solved."
1976 Cizek Audio Systems