With the remarkable advance in audio technology achieved within recent years, and the ceaseless striving of an elite team of engineers devoted to the task of producing perfect sound reproduction equipment, Technics has succeeded in achieving very high standards in its audio equipment, as can be seen in the case of the ST-8080 stereo tuner. This high standard will inevitably become the norm in future years, but that is hardly welcome news for audio enthusiasts looking for the best their money can by now.
The ultimate aim in any top grade stereo tuner is the perfect reproduction of the original waveform of the radio signals transmitted from the broadcasting station. This is certainly no easy task, since, besides other things, this involves the complete banishment of all interference and noise signals and the ability to mainta in stereo separation at exactly the same level as in the original signals.
The waveform of the signals comprising any musical expression is usually very complex, and cannot be used effectively to point out the differences between original and reproduced signals. In normal analysis, the tuner's ability to reproduce these signals is shown by using simple square wave and tone burst signals. 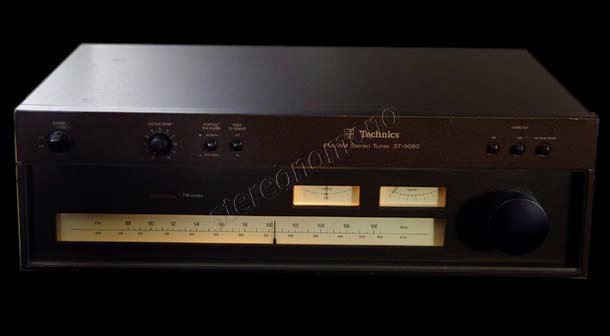 The results shown here illustrate the marked differences between the ST-8080 (in which the ultimate design priority has been placed upon waveform fidelity) and a conventional tuner (conspicuous for the lack of emphasis on waveform).
Photograph A.

The results shown in this photograph highlight the difference in response to a composite signal of a 50Hz square wave signal plus 1kHz sine wave signal. The very steep "sag" in the square wave output signal from the conventional tuner is indicative of the poor amplification phase characteristics in the low frequency region (which introduces distortion into the signal), while the depressed sections at the start of the 1kHz sine waves signify a very small dynamic range at lower frequencies.
Photograph B.

5kHz and 15kHz sine waves are modulated and demodulated independently, but are shown here (upper half of photograph) on the same time axis in order to reveal any change in time relation between the waves. The output of the ST-8080 shows no time change whatsoever, while the 5kHz and 15kHz signals passed through the conventional tuner have arrived at the output at different times. lf these 2 signals are then combined( lower half of photograph) the loss of waveform fidelity in the conventional tuner is even more evident. 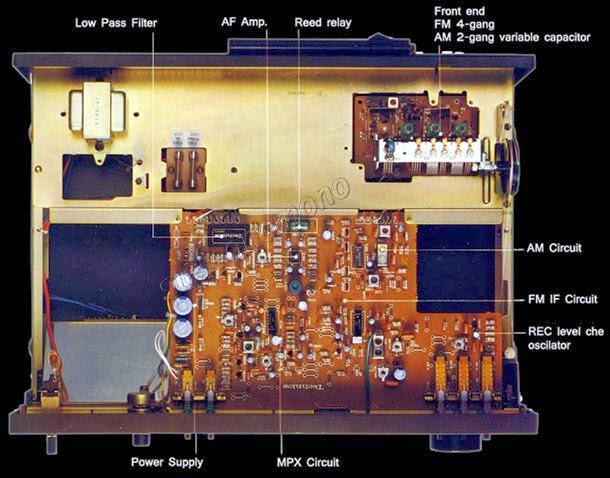 High Sensitivity Front-End (10.8 dBf)with 2-Stage RF Amplifier and 4 -Ganged FM Variable Tuning Capacitor.
The adoption of two low-noise  4-pole dualgate junction FETs and linear 4-ganged FM variable tuning capacitor in the  2-stage  RF amplifier stage is  largely responsible for  the very high sensitivity in the  front-end.
Usable sensitivity is 10.8dBf (or 1.9 µV according to IHF '58) at 300 Ω antenna input impedance, while the 50dB quieting sensitivity (stereo) is 34.3dBf (or 28.4 µV  IHF '58) at 300 Ω. With this kind of sensitivity, together with the greatly reduced interference signal  levels, even very remote FM stations are received with great clarity and fidelity.
Of special importance is the suppression of the interference caused by RF intermodulation, and the consequent improvement in selectivity in the more crowded sectrons of the FM band. The RF lM interference rejection curves are shown here in graph form.
Naturally, the higher the values( in dB) the better, but such values are very difficult to obtain without sacrificing sensitivity in reception of distant stations. Albeit, as can be seen in the graph, Technics has succeeded in attaining avery high standard indeed, and this without compromising sensitivity at all. 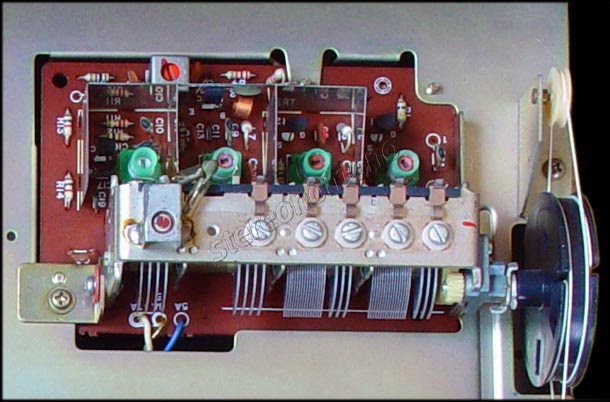 New Developments in Local Oscillator and Mixer Stage Further lnprove Stability and S/N Ratio.
The greater overall stability of the ST-8080 tuner is also due to the improved stability of the local oscillator and mixer circuits which incorporate special low-noise transistors, and a recently developed aluminum core oscillator coil. And circuit sections prone to the effects of changing humidity, etc. Have been further stabilized by the use of special point-to-point wirrng techniques.
The use of special low-noise transistors designed to eliminate noise in both high and low frequency regions, and the extremely strict selection of circuit components, have greatly attributed to the very high S/N ratio, and the noticeable lack of frequency drift.  Special care has been taken to separate oscillator's hot side from the foil on the printed circuit board, another innovation resulting in drift-free performance. 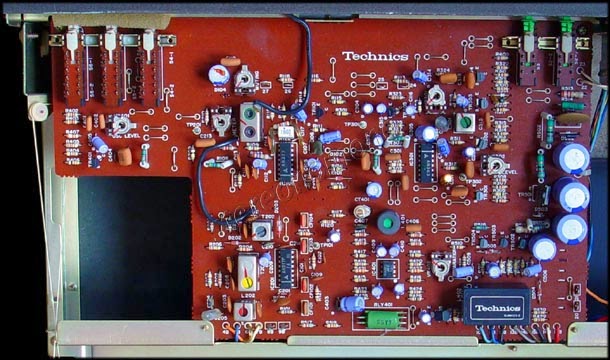 Advanced Type Flat Group Delay Filters Solve the Conflicting Demand for High Selectivity and Low Distortion in lF Stage.
A selectivity rating as high as 85dB, and adistortion ratio as low as 0.15% (100% modulation, MONO) in the ST-8080 has been accomplished by some very clever electronic engineering. The four flat group delay filters (one narrow band type, and three wide types) feature  4 -resonator type ceramic filters of very high selectivity characteristics. In addition, the amplification stage consists of 3-stage and 2-stage differential  amplifiers (in two separate lCs) connected to a quadrature detector.  At  ±400kHz, a very impressive alternate channel selectivity of 85dB has been obtained.  And even at ±200kHz, selectivity is still in excess of 10dB, which means that no matter how crowded the band may be, the desired signal can still be singled out with a high degree of clarity. These filters also assit in maintaining excellen stereo separation.
Here again is ample evidence of the very careful attention that Technics pays to the performance of the audio equipment it designs, not only in terms of  audio requirements, but also in terms of performance as communications equipment. No matter how low harmonic distortion may be suppressed, it will have little significance if the system is still  subject to other forms of interference. Only when all performance requirements are fully met, can the equipment be honestly be considered as a genuine FM stereo tuner.

Super Flat Frequency Response from 20Hz to 18kHz (+0.2dB,-0.8dB)
Needless to say, waveform fidelity would be impossible  to attain in a tuner suffering from phase inversion and poor frequency response.  In the ST-8080, the 19kHz pilot signal, required for stereo demodulation in the MPX curcuit, is cut out with razors harp precision by the pilot cancel circuit (a Technics invention now copied by many other manufacturers). Besides improving frequency response, it also reduces distortion, and escapes the problem of phase inversion associated with low pass filters (which also inavoidably cut off some of the high frequency portions of actual FM programs).
Excellent linearity is also obtained, the response curve being incredibly flat (+0.2dB; -0.8dB) all the way trom 20Hz to 18kHz.
Together with the improvements gained by the flat group delay filters in the lF stage, an extremely high degree of fidelity in waveform has been accomplished. Furthermore  the 38kHz subcarrier signal has also been cancelled by a similar circuit, reducing the possibility of interference from this source to zero. 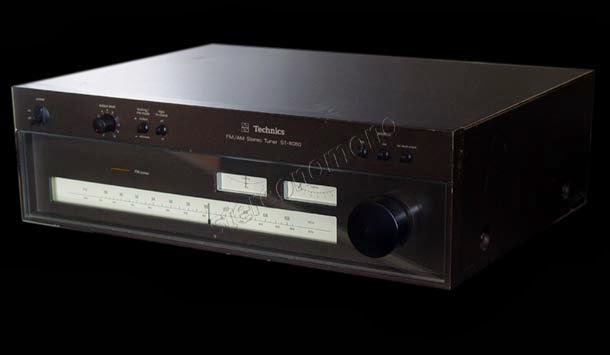 Superb Stereo Separation (45dB at 1kHz) Due to New PLL  IC in MPX Circuit
Although the PLL (Phase Locked Loop) system is now quite common in the MPX circuit (where the left and right stereo signals are retrieved from the transmitted "multiplex"signal), the ST-8080 has improved upon this system by accommodating it in a newly developed IC (AN363). The advantages include greater stability and reliability under varying external conditions, decreased distortion especially in the high frequency region, and higher stereo separation. The improvement in waveform transmission is quite marked (see photograph A and B), not only because of the greatly reduced higher harmonics, but also because of  the reduction of unwanted components caused by beating.
This IC employs a voltage controlled oscillator to generate a 76kHz signal, which is then divided into 38kHz, and 19kHz signals.  This 19kHz signal is synchronized perfectly with the pilot signal, passed out of the IC via pin no.12, and undergoes waveform shaping into a pure19kHz signal, which is then mixed with the composite signal at the input of the MPX circuit, resulting in the cancellation of the unwanted pilot signal. This further eliminates the occurrence of poroblems in the succeeding nonlinear circuits. 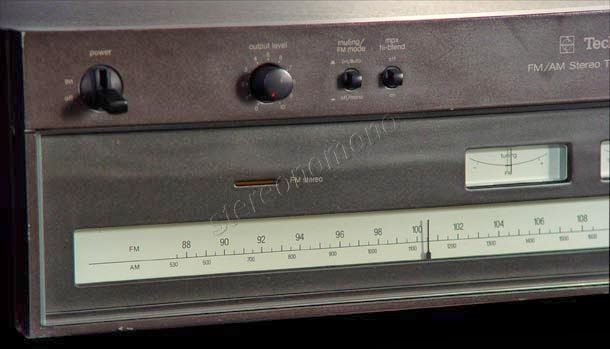 Low-Noise Amplification IC  in AF Stage
The thoroughness of Technics pursuit for waveform fidelity is further emphasized by the quality of the circuitry employed in the AF stage. The IC  adopted here includes a first-stage differential SEPP output for audio frequency amplification, and is operated by a stabilized power supply. Besides the variable level outout control, the ST-8080 also features a separate output for tape decks. The level volume control is the precision adjusted low gang error type. The fixed output terminals (for recording) include  a special type of  lowpass filter of excellent phase delay characteristics, and which suppresses carrier leak to less than  -70d8.

High Grade Signal Strength Meter for Greater Precision and Versatility
Linked to the quadrature detector circuit, this extremely li near signal meter (fl at right up to 65dBf) is fully qualified to measure signal strengths  to very high levels. This will prove very useful in finding optimum antenna position and direction for weak and strong FM stations alike. 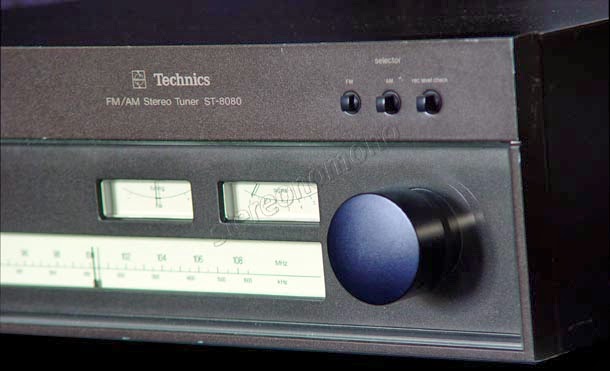 Two-Way Muting
With muting circuitry in the reed relay of the output stage, and in the quadrature detector IC, 2-way muting is provided to suppress inter-station and tuning noise to a high degree.

MPX Hi-Blend for Noise-Free Stereo Reception of Distant Stations
The multiplex hi-blend switch betters S/N ratios in reception of weaker and more distant FM stations. The ST-8080 also features multipath measuring terminals to which an oscilloscope may be connected. Optimum antenna position and direction can thus be determined with great accuracy in situations troubled by multipath interference.

Also High Quality AM Reception
Nor has there been any skimping in design considerations for AM reception. Incorporating a high-Q ferrite bar  antenna, an IC developed specifically for AM, and the very high selectivity of the ceramic filters in the lF stage, exceptronally high reception standards have been achieved.