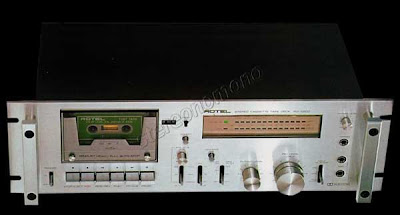 Rotel's 2000 series uses the newly developed and superior SC (sendust core) Head for its REC/PB cassette deck head. The Sendust alloy adds silicon and aluminum to pure iron to give the best magnetic characteristics possible in the ideal REC/PB head.

The Sendust Head solves the problems of weakness and headwear in permalloy and the poor magnetic characteristics of ferrite, which is durable but liable to cracking. Excellent magnetic permeability and a high S/N ratio are thereby guaranteed. Moreover, since it provides as accurate a gap as the ferrite head, even very high frequebcy characteristics are improved. IN addition, with a greater maximum flux density then permalloy linearity is improved and less headwear results in superior performance. A magnetic coercity of 1/2 that of ferrite but magnetic properties equivalent to permalloy ensures less need for demagnetization and overall ease of maintenance.

The RD-2200 uses the ultra modern LED BAR CHART PEAK INDICATOR for record and playback. This consists of 13 independent LED each for both right and left channels that register from - 20 dB to +3 dB. Compared to the analogue system of other peak level meters with limited speed of response, the digital system is superior in speed and presentation since it converts information into peak and average levels. By eliminating all mechanical meters and employing electronic circuitry an instant and accurate register of information is ensured. Parallel displays of both right and left channels provide easy visibility and quality recording.

Depressing the Memory button during recording or playback and adjusting the tape counter to "000" means that the tape will automatically stop at "999" when rewound a major assist in listening to the same tape segment more than once.

Rotel's 2000 series tape deck has a built-in separate MPX filter switch for optimum FM recording. When "ON" it cuts the 19 kHz and 38 kHz pilot/carrier signals from FM tuner to enable ideal recording; when "OFF" there is no high frequency cutout for other recordings (record disc or microphone), thus permitting optimum frequency response available for recording.

The Bias and Equalizer tape selectors each have three positions and function in tandem with the superb Sendust Tape Head to get the most out of todays' high quality tapes. In addition to the three positions of Normal, Ferri-Chrome and Chrome there is a control knob for bias adjustment when the bias selector is on "NORMAL" for optimum performance with a particular tape. 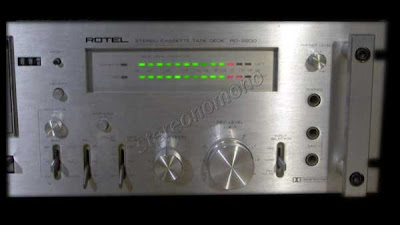 Rotel's Dolby NR system reduces annoying tape hiss without harming frequency characteristics and improves the S/N ratio to a maximum of 10 dB. Use of Dolby IC's in the 2000 series has simplified construction and improved stability with time.

Rotel's RD-2200 model has a unique but effective REC MUTE position on its selector. Whereas the Pause button stops the tape and recording momentarily, the REC MUTE position merely stops the recording, and not the tape - in other words, it makes it possible to create blanks in the recording. With the addition of this function on a tape deck, editing of cassettes has become far easier.

Rotels FAS mechanism operates in all modes including Record, Play, Fast-Forward and Rewind to stop the tape before it reaches the end and returns the respective buttons to their "OFF" positions.

Depressing the Cue and Review switch during playback speeds the tape in either direction and normal playback is resumed instantly when the switch is released: an immeasurable aid in locating a particular song ir segment of a recording.

Motor: EG and a DC motor