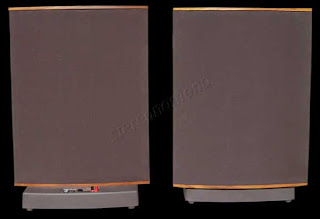 "The Quad ESL-63 sets new standards in three important areas of loudspeaker technology, low distortion, low colouration and controlled directivity, resulting in a a level of performance limited solely by the quality of programme source.
With Quad Esl-63's and  a CD player less than 0,1% THD intrudes between the listener and the studio master tape, reproducing exactly what was recorded, nothing added, nothing taken away and bringing the listener that much closer to the original sound."
From Quad Advert 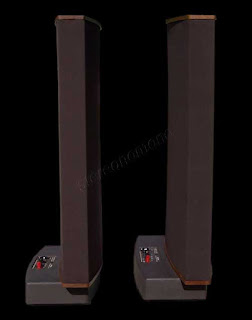 An electrostatic loudspeaker consists of light thin membrane on which is placed a charge, suspended between two acoustically transparent, (i.e. with holes), electrodes. When asignal is fed to the electrodes a field is generated between them and the charged diaphragm complled to move by an electrostatic force. Reversing the polarity of the signal on the electrodes causes the diaphragm to move in the opposite direction and thus sound pressure is generated.
The electrostatic loudspeaker has several inherent advantages. Since the diaphragm is driven over its whole surface it does not ned to be stiff and can be made extremely light and thus have negligible stored energy. Because of the good impedance match with the air it is not necessary to load the loudspeaker into a box and the problems associated with cabinet resonance disappear. Designing and manufacturing electrostatic loudspeakers is by no means easy but the potential is there for a higher degree of performance than with conventional loudspeakers.

An ideal loudspeaker would consist of a single point source reproducing all frequencies. The Quad ESL-63 uses the electrostatic principle to achieve just this. 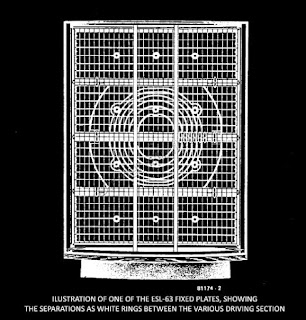 Imagine a theoretically ideal point source loudspeaker radiating sound pressure waves and a plane in the air a short distance from the source at right angles to the direction of propagation. Were we able to make the air at the plane visible we should see concentric waves radiating out from the centre, as if we had just thrown a stone into a still pool.
If we replace the plane with a very light membrane, induce it to reproduce the air particle motion already observed and suppress the original source, the results to a listener on the far side are absolutely indistinguishable from those of the ideal source.
The Quad ESL-63 does exactly this. 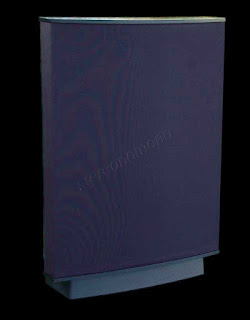 It consist of a diaphragm suspended between two sets of concentric annular electrodes. Signal is fed to the electrodes via sequential delay lines and the diaphragm motion produces a sound pressure pattern which is an exact replica of that from an ideal source placed some 30 cms behind the plane of the diaphragm. The ESL-63 is a totally homogeneous sound source, phase true and very aperiodic with a frequency response both on and off axis quiete free from the irregularities which are inevitable with any multiway loudspeaker system.
The designer has complete control over the directivity of the loudspeaker and by increasing the directivity index smoothly with increasing frequency, optimum stereo performance is achieved.
The Quad ESL-63 is a dipole which has significant benefits in terms of room placement and stereo perception. With a sound dispersion pattern which resembles a figure of eight, a dipole radiates no energy in the plane of its diaphragm and does not excite room modes whose axes lie in this plane.
The nett result is a loudspeaker of unsurpassed accuracy which given the right programme material will produce a more realistic and satisfactory illusion of a live musical performance than has previously been possible. 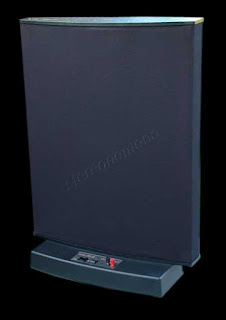 Development of the Quad ESL-63 has taken many years. Much of the time has been spent in investgating and experimenting with new materials and production techniques, the result of which has been that variations due to manufacturing tolerances have been virtually eliminated, sample variation being to within less than ±½ dB and stability of the materials used is such that the performance will be maintained for the loudspeaker's useful life without the need for regular maintenance.
The impedance characteristic of the lodspeaker is nominally 8Ω and largely resistive, presenting no problems at all to the amplifier, but amplifiers which are not short circuit protrcted must not be used with this loudspeaker.  The amplifier should have an output capabilty of 40 V peak (100 watts into 8Ω). Amplifiers with output capability of up to 55V peak (190 watts into 8Ω) can be used, but to no advantage.
The loudspeaker is fitted with two protection circuits, one which limits the maximum input voltage fed to the loudspeaker and the other which detects fault conditions and instantaneously shorts the signal being fed to the loudspeaker. It is impossible to damage the loudspeaker elements, but the input voltage limiter has limited thermal capacity and persistent overdrive will overhear it. 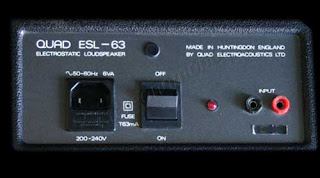