JBL  SE-408S Transducer Energizer - takes the place of a conventional stereo power amplifier, mounts directly into the rear panel of JBL loudspeaker enclosures. Plug-in equalizer boards tailor the characteristics of the SE-408S to precisely match the requirements of the loudspeaker systems which it drives. Performance of such a self-Energized combination is audibly superior to that which can be realized from any all-purpose amplifier

Special Features:
Plug-in equalizer boards match the performance of each channel of the Energizer to the requirements of the particular loudspeaker system used; exact damping for best transient reproduction, final frequency response correction for smoothest response. With the boards inserted for unequalized operation, the Energized operates as a laboratory standard power amplifier of the highest quality.

Circuit:
The JBl T-Circuit is an analog computer-type operational DC amplifier, the most nearly perfect amplifying circuit ever developed. All stages are direct-coupled, including the output stage, so that accurate control of the loudspeaker is maintained all the way down to zero frequency. 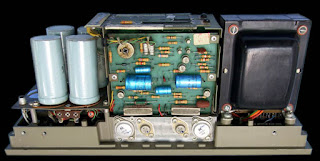 Specifications:
(All specifications are measured with both channels operating simultaneously into 8 Ω loads. AC line voltage is held to 117 volts, 60 cycles. In normal operation, the performance of the SE-408S  is not appreciably affected by line voltage fluctuations between 110 and 127 volts.)

Power Output:
80 watts continuous RMS power;
40 watts per channel, at any frequency from 10 cps to 30,000 cps
Frequency Response:  with equalizer boards inserted for unequalized operation):
±0,25 dB form 20 cps to 20,000 cps
±1,5 dB from 3 cps to 175,000 cps
Harmonic Distortion:  less than o,15% from 20 cps to 20,000 cps at 80 watts or any level less than 80 watts
Intermodulation Distortion:  less than 0,15% at 80 watts or any level less than 80 watts (IHF standard 60 - 7,000 cps, 4 : 1 ratio)
Sensitivity:  0,8 to 3,0 volts input for rated output, depending upon the particular equalizer boards installed.
Hum and Noise:  90 dB below rated output
Transient Response:  with equalizer boards set for unequalized operation, rise time is 2,0 microseconds from 10% to 90 % of square wave signal at 160 watts peak power or any lower power level. Response to such square wave signals is free from detectable overshoot or ringing, as observed on an oscilloscope.
Overload Recovery:  less than 1/10th of one cycle to recover from 100% single cycle overload at any frequency from 20 to 20,000 cps
Output Impedance:  8 Ω rated impedance
(when driving a 16 Ω load, the SA-600 meets all published specifications except that power output is reduced to 64 watts. Wen driving a 4 Ω load the SA-600 produces 130 watts of undistorted power for brief periodes of time.  Prolonged operation at more than 40 watts per channel however will trigger the built-in automatic overload devices.
Stability:  the SE-408S, like the SA-600, utilize the exclusive JBL T-Circuit. The circuit is completely stable when connected to any loudspeaker system or even to a capactive load. Specifeid distortion and stability without ascilation are maintained through extreme variations in output load, whether resistiv, capacitive or inductive. Moreover, AC line surges do not affect the stability of the circuit.
Short Circuit Protection:  Absolute, The SA-600 cannot be damaged by accidental or intentional short or open circuit at the output terminals, or by any degree of impedance mismatch.
Transistors:   22 silicon transistors plus 20 silicon diodes.
Dimensions (W x H x D):  SE-408S :  15-1/4" x 4-5/8" x 6-3/4"