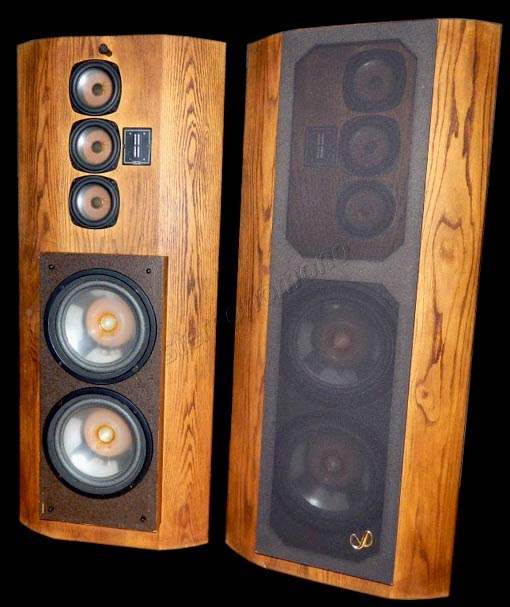 Since its inception, Infinity has been setting new standards of accuracy in music reproduction. Its speakers are designed to, as closely as possible, translate acoustic theory into practical reality.
There are two theoretically ideal ways of propagating sound in a room environment; the line source and the point source.

The Infinity Reference Standard, introduced in 1980 as a nocompromise state-of-the-art. Speaker system, approximates line source propagation, in which the sound source must be infinitely long vertically.
The vertical dimensions of the Infinity RS is nearly equal to the vetical dimension of most rooms, approximating ideal line source conditions in a closed environment. Horizontally, the driver is so narrow at all frequencies in the audio band that its audio dispersion is essentially complete.
Now we are pleased to announce the Reference Standard II, a practical simulation of point source theory.
A true point source would be an infinitely small, pulsating sphere, with all frequencies radiating equally in all directions.
In the Reference Standard II, point source technology is simulated by decreasing the size of the radiating area as the frequency increases.  Thus, the source is always small compared to the wave length of the sound being radiated.
The Referency Standard II inherits some of its design configuration and technologies directly from the Infinity Reference Standard. However, its price, unlike the the $20,000 IRS, is affordable to most serious audiophiles.
Its diffraction wing design and dipole drivers in the high and mid-frequencies create an arresting depth, breadth and clarity of musical image.  Its dual 10" woofers in a new Infinity/Watkins woofer/subwoofer configuration are in their own enclosures, and incorporate rool-offs at different crossover points. This yeilds deep strong bass, as well as exceptional tautness and clarity in the midbass. 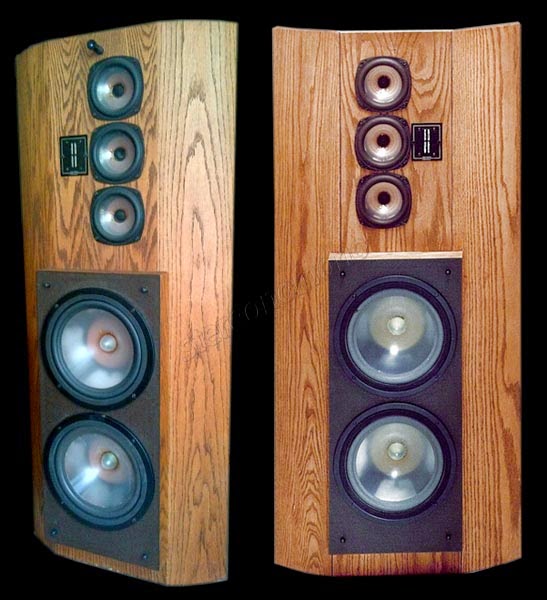 Diffraction wings and what they do.
The elegant curve of the reference Standard II enclosure wings is precisely calculated to minimize the distortion caused by diffraction.
In an ordinary speaker sound waves propegated by the drivers bounce off the front of the enclosure. These diffracted waves interfere with the principal wave, causing cancellation "dead spots" in the listening room, and out-of-phase distortion.
As a result, the music is blurred and sounds muffled; the stereo image is cinfused, inconsistent, or absent altogether, depending upon one's listening position in the room.
As with the $20,000 Infinity Reference Standard, the Reference Standard II diffrection wings are mathetically curved so that the diffraction effect is minimized. The small portion of the sound waves which is diffracted  is propagated to the sides and back. Cancellation "dead spots" and out-of-phase phenomena are effectively eliminated from the listening area.
This creates an illusion of the three dimensional imaging so accurate the listener can "place" every instrument in the orchestra; front to rear, as well as left to right.
For example, Pink Floyd's "The Wall" side 1, reveals a panorama of sound with breathtaking impact.  As the distant helicopter approaches and lands, it seems to travel through the top to the bottom of the speaker; you almost feel the wind from the chopper blades as it taxis past. The children's voices, their English accents clearly discernable as they sing. Are heard, not on a single plane, but in layer after layer of sound, clearly defined in space. 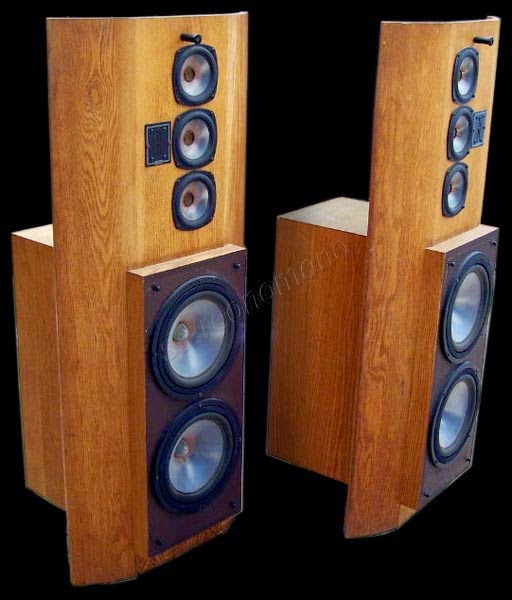 The Two Woofers
Two ten-inch woofers in the RS II are identical - yet they are used independently. Although they both operate in the very lowest bass ranges, one rolls off at 60 Hz, the other at 125 Hz.
This is a new embodiment of the Infinity/Watkins principle; instead of two voice coils on one woofer, there are two woofers operating together at certain frequencies, yet rolling off independently.
The two woofers - each in its own enclosure - are mounted in a special master enclosure of oak vener, suspended within the diffraction wing and stepped forward to assure precise phase relationship with the other drivers.
The Three Midrange Drivers.
The three five-inch midrange drivers are dipoled by leaving their backs open, allowing the back wave to complete the point source radiation pattern.
Employing a unique arrangement, the midranges crossover at two different frequencies. The upper most and the lowest operate up to 1500 Hz, while the central midrange works up to 3 kHz.
From a technical point of view, this produces distinct advantages.
Better midrange coupling is achieved in the critical lower midrange area. And, by spreading out the crossover frequencies, response is made uniform and the directivity index is made to correspond to point source radiation within the range of utilization of each separate driver. 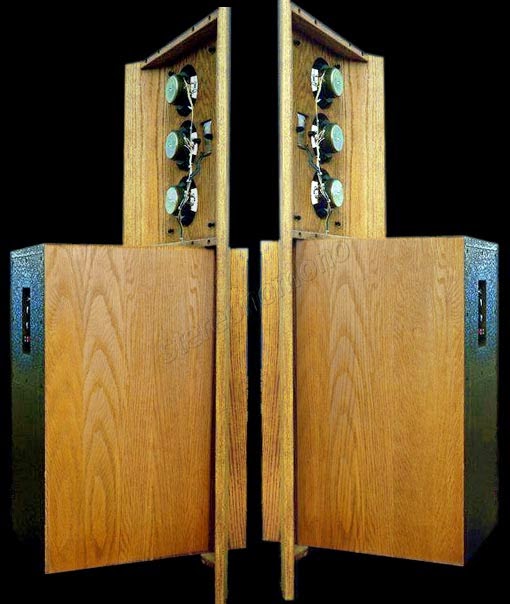 Polypropylene cones; the advantages are obvious.
Although much has been written sbout the many advantages of polypropylene over paper cones, and cones of exotic materials, its advantages are clearly evident upon first hearing.
This extremely light, yet very stiff material with no intrinsic sound of its own, responds uniformly and instantly to the input signal, producing music that is astonishingly clear and accurate.
It is impervious to heat, moisture and the wear and tear that shortens the life of traditional cone materials.
Polypropylene cones are used in the woofer and midrange drivers of the Reference Standars II, as they are throughout the Infinity RS series speakers.
Present Perfect.Future Positive.
Our design objective for the reference Standard II was to utilize audio technology developed for the massive Infinity Reference Standard to create a much smaller, much less expensive speaker system -  a system more technologycally advanced, more aesthetically appealing in its price range than any other speaker available.
We hope you find the RS II a profitable investment in pleasure; and an enhancement to the quality of your life - for a good many years to come. 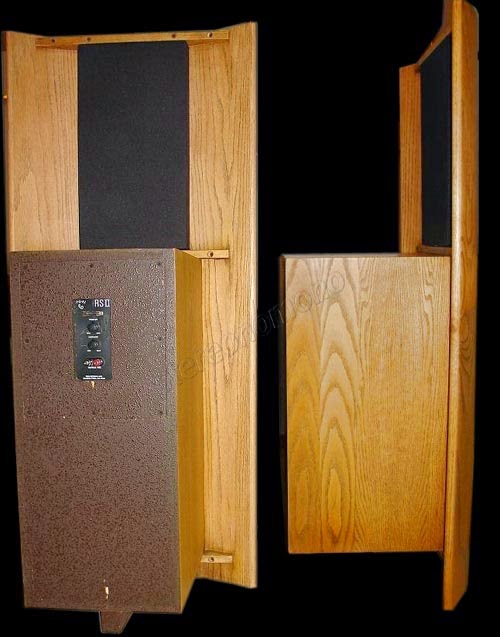 The Two EMIT tweeters.
The EMIT electromagnetic induction tweeters found in the RS II are considered the state-of-the-art. Tweeter by critics the world over.
EMIT, with its powerful samarium-cobalt magnets and an almost zeromas etched planar diaphragm, is unique in its ability to combine exceptional powerhandling capability with extreme delicacy - through a superauditory 32 kHz.
The Reference Standard II has two EMIT tweeters configured in a dipole pattern; one firing forward and the other facing the rear.
It should be noted that EMIT tweeters are used, in varying configurations, in every Infinity Reference Standard  and RS series speaker. 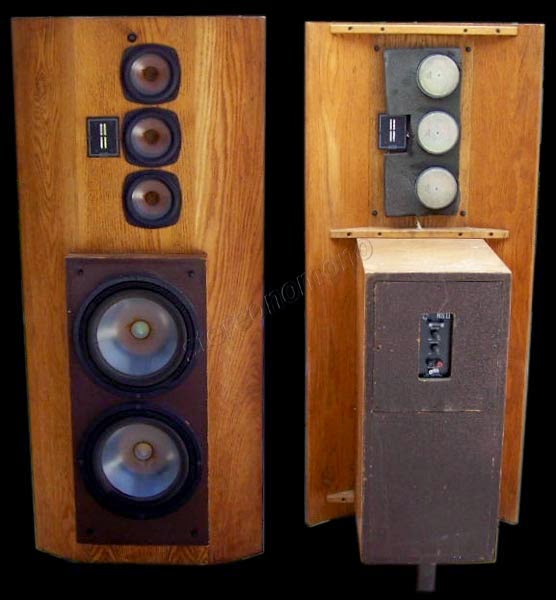