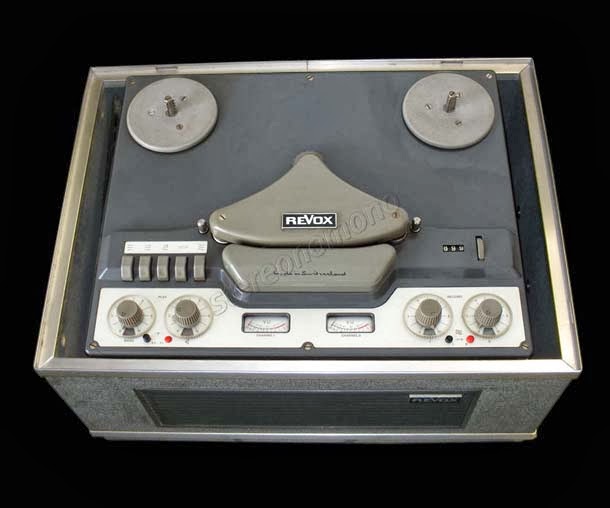 Widely acclaimed throughout the world for its superb craftsmanship, the ReVox tape recorder is now available for the first time in U.S. and Canadian markets. The discriminating audiophile is well aware that there can be no compromise with quality and that the excellence of tape recordings is directly dependent on the skill and care used in the manufacture of their tape recorder. Quality control, constant checking and testing during every phase of ReVox manufacture and the use of highly rated components are the hallmarks of this superior instrument. ReVox is backed by a tradition of almost two decades in the manufacture of studio and broadcast tape equipment. The experience gained has resulted in ideas which have been incorporated into each ReVox. The ReVox, the instrument of choice by amateur and professional tape recordists, is also used in numerous industrial applications, in universities, as a teaching aid.. And as the focal point in home entertainment centers.  Its applications are seemingly limitless. Its quality is singular. 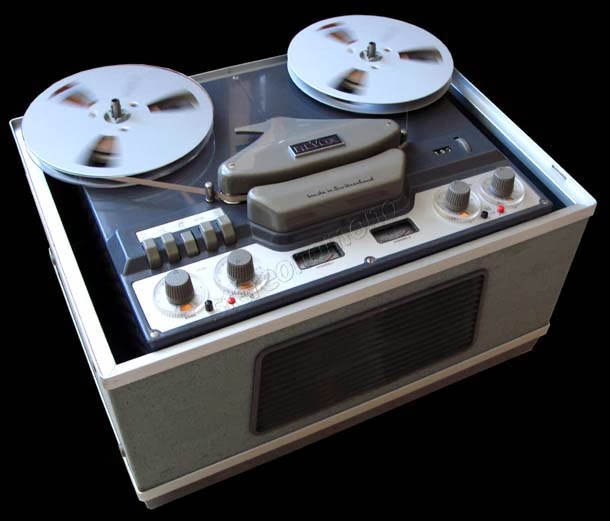 Professional Features of the ReVox
Push-button electrical control of all operating modes.
Spool turnscounter.
Remote control facility.
Recorder can be used as an amplifier by switching off the capstan motor.
Additional low-impedence speakers can be connected.
Handy carrying case with pockets for two 10 ½" reels.
Constant speed hysteresis-synchronous heavy duty Pabst motor using direct drive of capstan. No belt of friction drives for the capstan shaft.
No pressure pads to clean - no pressure pads to wear out. This assures long head life and avoids longitudinal vibrations of the tape.
Three ring-core heads (2- or 4-track).
Separate pabst Outer-Rotor motors fro wind and rewind.
Tape speeds of 7½ and 3¾ i.p.s. obtainable through pole switching of capstan motor.
Reel size selector assures uniform tape tension for reels up to 10 ½ inches.
Recorder may be operated horizontally or vertically. Tape reels can be locked on to their shafts.
Two separate recording and replay amplifiers.
Cathode-follower low-impedance outputs.
Six-watt built-in monitor amplifier.
Two VU-meters with dynamic characteristics as per the ASA for individual record level control.
Both inputs may be mixed for mono-recordings.
Duoplay (sound with sound), Multiplay (sound on sound) and echo are possible wihout accessories. 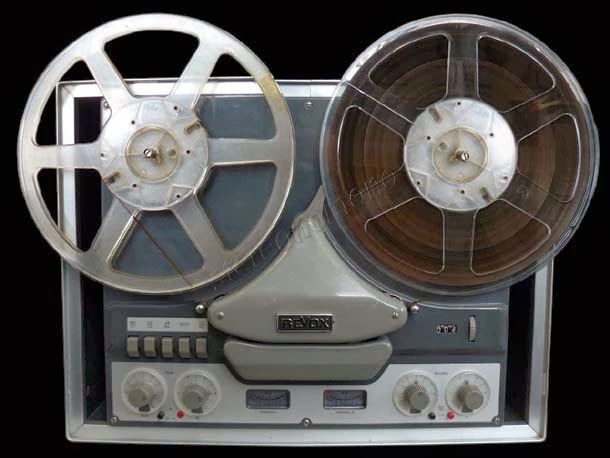 Special Design of The ReVox


Three motors are usually found only in professional tape recorders. This rather costly design assures optimum performance especially regarding to wow and flutter, and it is mechanically simple without containing any fast wearing parts. 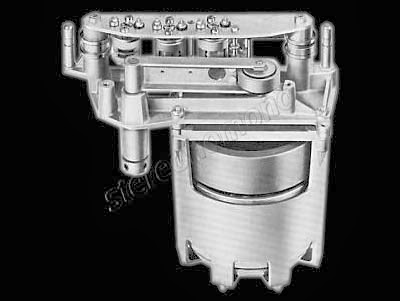 A design unique for an amateur recorder. Consisting of five diecastings, these parts, when attached to one another, from the very rigid unit which carries  the head-block and tape-guides. This assures perfect and permanent head alignment under the roughest operating conditions. The powerful Hysteresis-Synchronous-Motor and the heavy accurately balanced flywheel are mounted in a diecast cage. The runout of the capstan shaft must not exceed 0,001 mm in order to pass inspection. This is a degree of accuracy found only in studio an broadcast equipments. 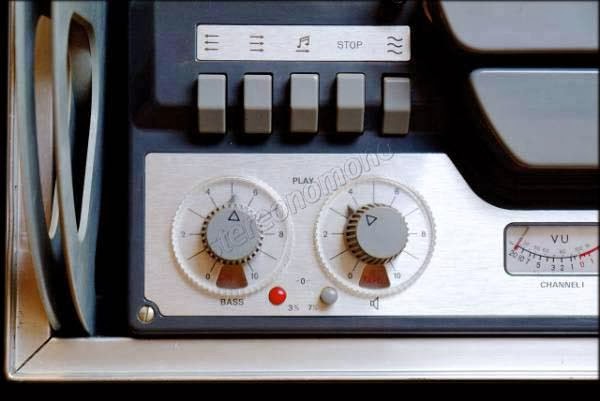 6/12 Hysteresis-Synchronous  Motor
The heavy-duty direct drive capstan motor is a hysteresis synchronous unit. The speed is electrically changed by controlling the number of poles. Maximum playing time can be had by setting the tape speed at 33 ¾ ips or superior quality by using a tape speed of 7 ½ ips.

Anti-Wow ans Anti-Flutter Design
The speed of the heavy-duty Pabst motor for the capstan is locked in with the power-line frequency, assuring remarkable uniformity of capstan shaft speed rotation. The motor is completely shielded, eliminating any stray megnetic motor flux. Precision bearings on the drive shaft removes the lateral pressure caused by the pinch roller and protect the motor from any uneven load.

Tape reels Up to 10 ½" Diameter
Maximum recording or playback time is assured through the use of reels having a diameter of 10½". These reels will accommodate up to 4800 feet of Lptape. Rewind can be accomplished in a few moments. Tape tension is controlled with a simple, easily operated, readily accessible control, which is designed so that large reels cannot be placed into position when it is set for reduced tape tension.

Separate VU-meters for each channel
The VU-meters on the ReVox are precision instruments with dynamic characteristics as required by the A.S.A. in the standard for volume measurement of complex waves. Accurate control of recording level is possible. Scale illumination of these meters is switched with the channel selector for added operating convenience. 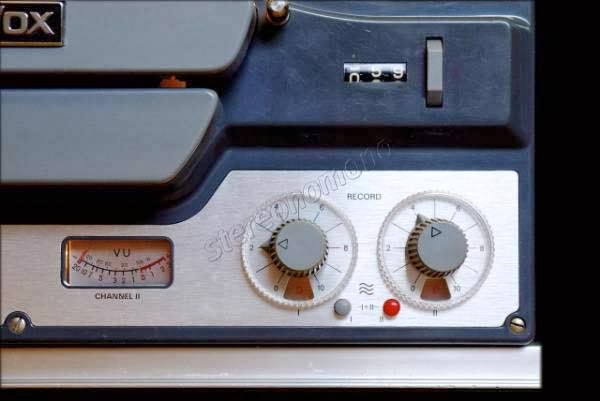 Solenoid Operated, Oversized Brakes
The brake bands are lifted off the linings during any operating mode. The required tape tension is achieved electrically by counter-torque on the winding motors. This assures minimum wear of mechanical parts. Braking is quick and positive from fast wind, even in the event of power failure.

Mechanical tape Stop
Because of the very fast winding speeds used by the ReVox, the instrument does not depend on metal contacts for stopping the recorder. A microswitch senses the end of the tape and turns off the motor circuits automatically after a real has been rewound. Automatic motor shutoff also takes place when a tape splice has opened.

Bulit-in Mixing Facilities
The mixing arrangements provide for the one pre-amplifier not in use for recording to be coupled with the other pre-amplifier through which the recording is being made, with neither gain control acting as a master. Thus any two signals may be mixed and recorded in the mono mode. The same controls are used for adjusting level and balence when recording stereophonically. Additionally, one channel can be set to playback while the other recording and all forms of sound-on-sound and sound-with-sound are possible.

Separate record and Playback - Amplifiers for both channels
The record amplifier hs a reserve gain of 14 dB before any distortion. Through the used of separate heads for record and play, continuous monitoring becomes possible.

Hum level
Every effort has been made to keep hum at an absolutely minimum level. The first stages of the amplifier have D.C. heated filaments. Teh power transformer has a grain oriented strip-wound core providing a minimum of stray magnetic field, reducing hum pickup. 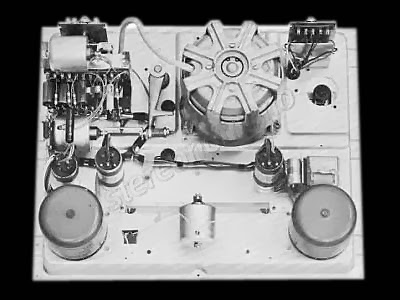 With the use of three motors the ultimate in simplicity can be achieved. Two motors for winding and rewinding and a third, the Capstan motor, for smooth and even tape transport during recording and replaying. There are no belts - other than that for the counter - no levers and no gears required for engaging the various operating modes 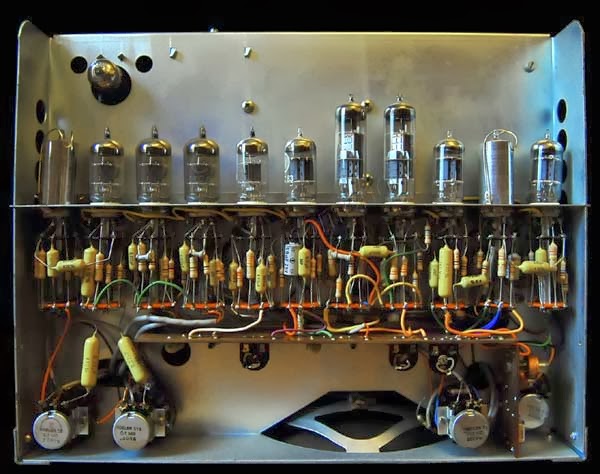 A glance at the amplifier chassis revoalscomponents of the highest quality not gonerally found in home equipment. Simple and easy to follow wiring takes the problems out of servicing.

Tubes
In addition to three silicon diodes and three selenium rectifiers, the ReVox uses a total of twelve dual function tubes. Each stage has been designed for single function operation. No simplification, with attendent tachnical compromise, has been permitted. 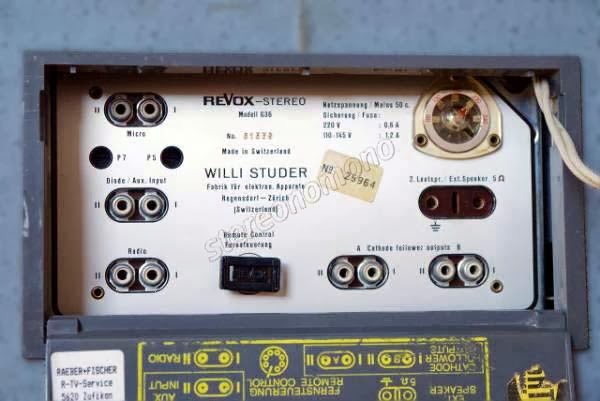